Europe in the age of imperialism. International investors try to achieve the greatest influence in Europe. With their bonds, they control the politics of the six imperial nations: Austria-Hungary, Italy, France, Great Britain, the German Empire, and Russia. The nations erect factories, build fleets, and deploy armies. The investors watch as their nations expand, wage wars, levy taxes, and collect the proceeds. Since the European nations are under the shifting influence of different investors, new strategic alliances and conflicts arise between them again and again! 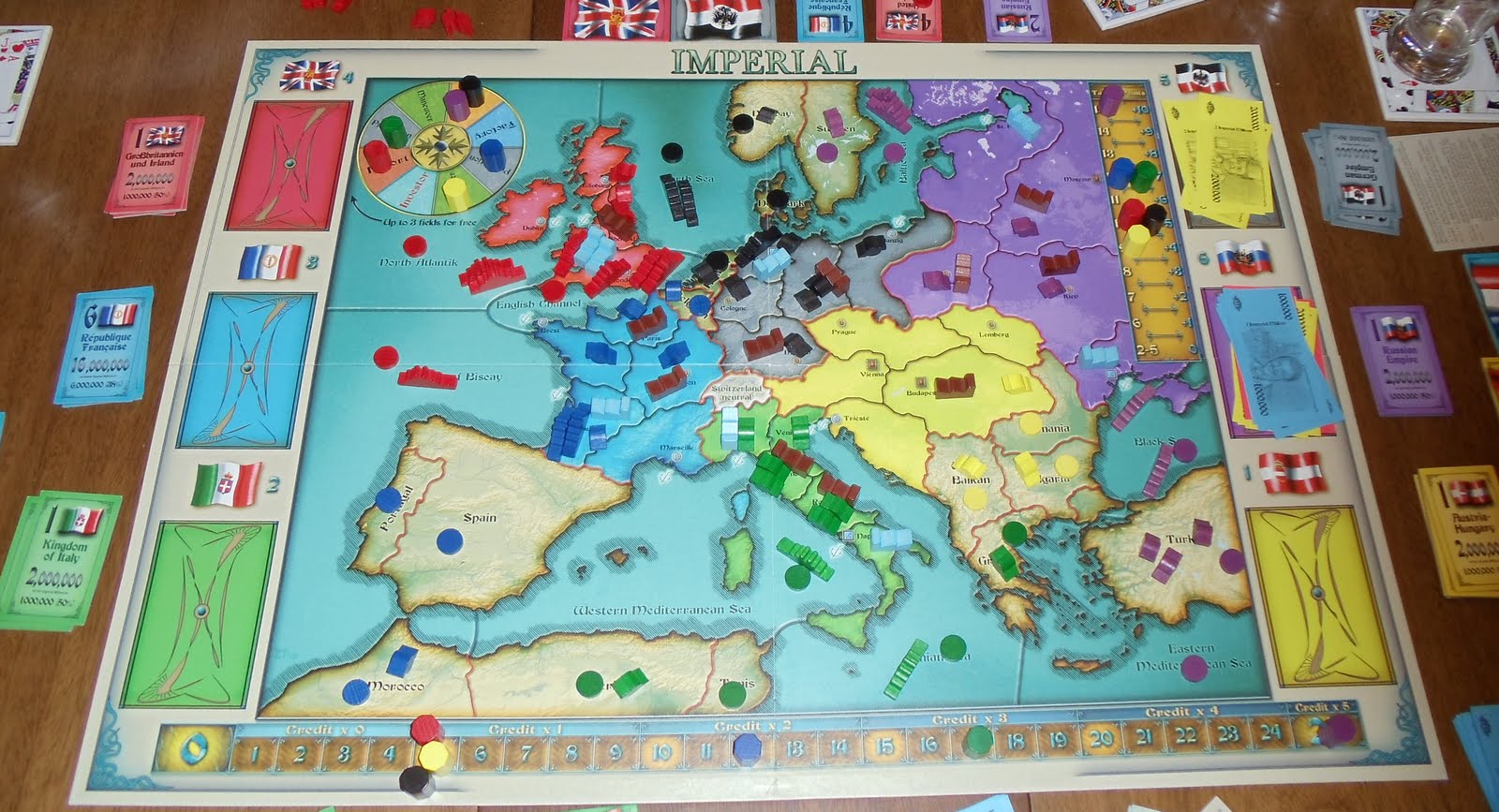 Millions of years ago the first men fought with other creatures for survival. By their ability to adapt to new types of terrain, they were able to flourish and eventually dominate the Earth. In this evolutionary game, players control up to six types of creatures indigenous to different regions of the land: Eagles (mountains), Bears (forests), Crocodiles (water), Mammoths (plains), Men (savannah), and Snakes (desert).

Each player takes the role of one of these six creatures, and tries to expand their herd and learn new abilities. As long as there is enough room in the region for all of the animals, the creatures can live together in harmony. Otherwise, battles erupt amongst the creatures for control of the region. Now, the success of the creatures depends on how well they adapt to their new terrain.

Which creature will grow its herd and develop the best strategy for survival?

Rise of Empires is an empire-building game in which players develop their ever changing empire from Ancient Age to Modern Age. War, economics, science and diplomacy are to be taken into consideration to successfully win this epic game.

In Rise of Empires two to five players are building their own civilization from the dawn of history to present times. All players start small and fairly powerless, however, through clever play they try to gain wealth and progress in several areas. Like many empire building games, it is possible to be wiped from the board one turn, only to return the next in another area.

Rise of Empires is divided into three eras. Each era consists of two game turns. The core of the game is the Action Display where players conduct various actions during a turn. The first turn in an era is called the A turn, the second one the B turn. In a way, the B turn is a mirror image of the A turn.

The aim of the game is to have the most victory points at the end. Victory points are scored by building cities, having an empire (area control), developing technology, and trading goods.

In contrast to some other civilization type games, Rise of Empires plays fairly quickly. A full game can be completed in less than three hours. It is also more abstract than many civ games, in that cities, towns, and technologies are represented by tiles the players keep, even if their civilization is buried in the sands of time.

Darjeeling has two main board areas. The first is an array of squares representing one, two or three half-crates of tea in four different varieties (colors). Each player has a marker which moves about in the array, picking up tea at the rate of one square per turn. There are simple rules governing movement in this array and the players compete for the desirable squares.

Eventually, several times per game, each player has enough squares of a single color to fit them together so that the half-crates all make whole crates. Now he can make a tea shipment. This pays off in victory points in three different ways. First, there is a “demand” award of up to 6 VP depending on how long it has been since anyone shipped this variety. Second, if the shipment was of at least four crates, there is a flat bonus of 1 VP per crate.

Third and most pivotally, there are VP that will be awarded at the beginning of the player’s next and subsequent turns. Each tea shipment is represented with cubes of the player’s color (not the tea variety color) on a sort of barge. The new shipment of tea is always placed, in the other of the two main board areas, at the top of a column of all the recent shipments (the number of total shipments varying with the number of players in the game), so that as more shipments are made, the old shipments drift farther down the column and eventually out of play. At the beginning of your turn, you look to see where your shipments are in this column, and they pay out VP with better multipliers the higher they still are in the column. This constitutes the driving force of the game, as nobody else wants to see your shipment at the top of the column for several turns in a row. Players thus have an incentive to make a shipment even if they haven’t yet assembled a large number of crates.

It’s a race to 100 points. A runaway leader can easily take over if the rest of the table is not vigilant, so the best games of Darjeeling are those among vigilant players.

Torres is an abstract game of resource management and tactical pawn movement. Players are attempting to build up castles and position their knights to score the most points each turn. Players have a limited supply of knights and action cards that allow special actions to be taken. Efficient use of pieces and cards, along with a thoughtful awareness of future possibilities, is the heart of this game.

In this game, you play a powerful lord and his faithful companion engaged in a fight for influence throughout time. The game proceeds simultaneously over three different periods. You start the game in the Middle Ages, on the first of the three game boards (that of the commanderies). With 4 action cards in hand per turn, you have seven turns in which to develop your domains by building various types of military, religious, and civil buildings. Depending on their size, certain buildings are moved in time, which means that they are transferred to the same place on the priories board (Renaissance period) and on the brotherhoods board (modern period), in ruins for military and religious buildings (castles, abbeys…).

Thanks to the watch makers’ invention, and with enough money, you can make your two adventurer pawns travel in time… Because if the construction of certain buildings can be profitable, taking over domains on the various boards is essential, since it will allow you to earn bonuses on the 4th and 7th turns and to move ahead of your opponents.

Playing with time is not without consequences, and it can produce surprising results! To give just one example, an abbey created on the priories board could be destroyed by a castle built later in the game in the same place but on the commanderies board, and then moved to the other board… The abbey finally never existed!

On the 4th and 7th turns, each controlled domain generates profits for the players depending on the board. On the the commanderies board, a player who controls a domain militarily, i.e. the one with the biggest military building, will receive the value of the civil buildings in this domain in profits. On the priories board, it is the religious control that will be taken into account. On the brotherhoods board, the players who have best populated the civil buildings and restored the ruins will secure the best profits.

The possibility of destroying and regrouping buildings to unite or divide domains provides a strong and permanent level of interaction between the players.

In Manhattan, players are constructing a skyline of skyscrapers over several districts, or city blocks, of Manhattan Island. Ultimately, each player seeks to have built the tallest buildings in the most city blocks of the Island.

Each turn, players will play a card that illustrates which part of a city block they may place a “floor” on a building. The placement card is unique for each player in that the section they may place in is relative to their seating at the table. The player who has placed the top most floor controls that building. Each round, scores are tallied based on control of each of the neighborhoods.

At the end of the game, the player who has scored the most points through area control and tallest buildings, wins.

This is a game where 2-6 people are dueling it out in fencing matches.

You have poise points which keep track of how “good looking” a character is. When you lose all of your poise points, and are a staggering mess, you can be stuck with a sword for the final blow and be killed.

You can regain poise by doing things to help make you look better, such as wiping your brow, or tucking in your shirt. You can play cards to enhance your attacks or to defend against an opponents attack. Such as parrying or “strong arming” your way through an opponents defense.

There are also weapons and items which can be played to affect the game in different ways.